Most Medicare drug plans have their own list of covered drugs, called a formulary. Plans cover both generic and brand-name prescription drugs.

The formulary must include a range of drugs in the most commonly prescribed categories and classes.
This helps make sure that people with different medical conditions can get the prescription drugs they need. All Medicare drug plans generally must cover at least 2 drugs per drug category, but the plans can choose which specific drugs they cover.
The formulary might not include your specific drug. However, in most cases, a similar drug should be available. If you or your prescriber (your doctor or other health care provider who’s legally allowed to write prescriptions) believes none of the drugs on your plan’s formulary will work for your condition, you can ask for an exception.

A Medicare drug plan can make some changes to its drug list during the year if it follows guidelines set by Medicare. Your plan may change its drug list during
the year because drug therapies change, new drugs are released, and new medical information becomes available.
If the change involves a drug you’re currently taking, your plan must do one of these:
• Give you notice in writing at least 60 days before the date the change becomes effective.
• At the time you request a refill, provide written notice of the change and a 60-day supply of the drug under the same plan rules as before the change.

Note: A plan isn’t required to tell you in advance when it removes a drug from its formulary if the Food and Drug Administration (FDA) takes the drug off the market for safety reasons, but it’ll let you know afterward.
You may need to change the drug you use or pay more for it. In some cases, you can keep taking the drug until the end of the year.
Generally, using drugs on your plan’s formulary will save you money. If you use a drug that isn’t on your plan’s drug list, you’ll have to pay full price instead of a copayment or coinsurance, unless you qualify for a formulary exception. All Medicare drug plans have negotiated to get lower prices for the drugs on their drug lists, so using those drugs will generally save you money. Also, using generic drugs instead of brand-name drugs may save you money.

• Tiers
To lower costs, many plans place drugs into different “tiers” on their formularies. Each tier costs a different amount. A drug in a lower tier will cost you less than a drug in a higher tier. Each plan can divide its tiers in different ways. In some cases, if your drug is in a higher (more expensive) tier and your prescriber thinks you need that drug instead of a similar drug on a lower tier, you can file an exception and ask your plan for a lower copayment. 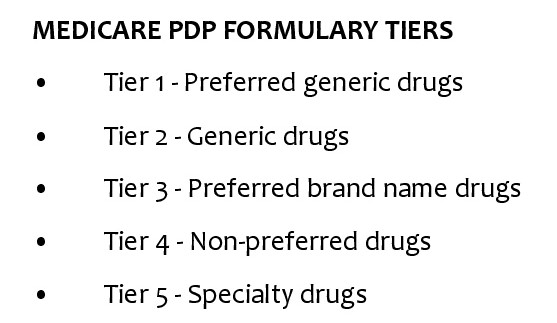 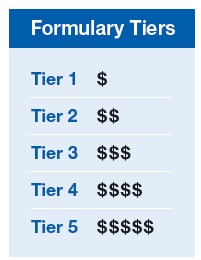