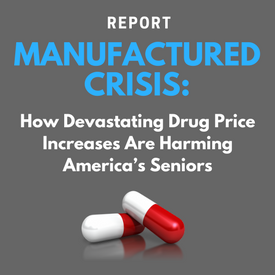 As policymakers gear up to address rising drug costs, a new report highlights just how much prices have gone up in recent years.

The prices of some of the most popular brand-name drugs have increased by 12% on average each year from 2012 to 2017, based on Medicare Part D data, according to a report released by Sen. Claire McCaskill, D-Mo. That's 10 times greater than the rate of inflation during that same period.

Though the number of these prescriptions decreased by 48 million in that window, profits increased by $8.5 billion. Twelve of the 20 medications included in McCaskill's report saw prices increase by 50% between 2012 and 2017. For six drugs, prices increased by more than 100% during that period.

"Can you imagine if you went to an auto dealership and last year's exact model was being sold at a 20% markup, and then you went back the next year and it had happened again?" McCaskill said in a statement. "That's exactly what's happening in the prescription drug industry, where the cost of identical drugs skyrockets year after year."

McCaskill's report comes as the Trump administration is planning a multi-pronged approach to lower the drug costs. During his State of the Union address, President Donald Trump said controlling drug costs is a major goal for his administration in the coming year.

The White House's plan includes pushing pharmacy benefit managers to share rebates directly with members, an issue that has been a matter of contention between payers and pharmaceutical companies. Payers take the savings from rebates and apply them across the board to lower premiums, though copays are based on a drug's list price, not the price after rebates.

Drugmakers have deflected blame for rising drug costs by pointing a finger at PBMs.

The administration's plan for drug prices, which was compiled by the Council of Economic Advisers, also suggests that some generic drugs should be offered for free and takes aim at "free-riding" abroad, where countries that have single-payer health systems purchase drugs at a low price, leading pharmaceutical companies to jack up the price for patients in the U.S.

Some experts said that the administration's plan is unlikely to drive down costs. Critics have also been skeptical that Department of Health and Human Services Secretary Alex Azar, who headed Eli Lilly's U.S. operations, will lead the charge on drug prices.

McCaskill's report notes that Medicare beneficiaries' spending on drugs is expected to continue to grow over the next several years. Prior research projects that that spending on medications will rise from 41% of per capita Social Security income to 50% by 2030.

Drug prices are a major concern among healthcare executives, and a recent survey shows that 70% feel they may need to operate their own pharmacies to help control costs.